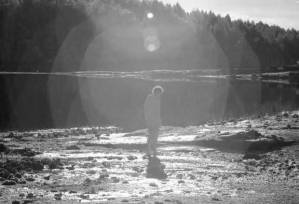 (Lou Reed rocked and took some trippy photos, too.)

When my daughter was about two and a half, we were listening to Velvet Underground and Nico sing, “Sunday Morning” on a Sunday morning (as is often our practice.  And “I’m waiting for my man” was soundtrack to French toast and pancakes–whichever vessel we chose for the morning’s drug: maple syrup.  For a while, we would alternate between that album and the Fugs song “Nothing.”).  As a surprise, while my husband was out of the room, I coached my daughter to say “Lou Reed is an icon.”  (She said it right on cue and got the laugh I was hoping for.)  “Lou Reed is an icon” became a sweet little joke in our house, an illustration of how we adults were indoctrinating our child.  (I make no apology about this.)

When my husband came outside into the sunshine today and said that Lou Reed had died, I cried.  Of course I didn’t know Lou Reed, and at first it felt hyperbolic, crying, but it came from a sincere feeling of shock and loss.  (How can Lou Reed die?  Right, I know we all die, but how can that apply to Lou Reed?)  I hugged my husband.  He said I was going to make him cry.  I explained to my daughter why I was crying.  We had a good talk, defining the word icon.  We talked about some of our other icons.  Some are famous, some are not.  The constellation changes, and also doesn’t.

Lou Reed is an icon.