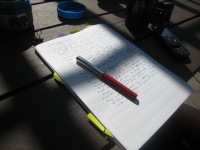 I asked the students in my creative writing class at Antioch College to try this. Because it was a good exercise for me as a writer to type up the sentences of these writers, I am posting it here.

Read Colson Whitehead’s “The Port Authority” and/or the fragment from Joan Didion’s “The White Album” (section 12, pp 44-45) again. Find a spot from which you want to take inspiration, and write for 10 minutes (or longer). This is a rather open-ended option.

OR, for a tighter frame:

Use one of these fragments below—You might even choose one sentence, or one image. Read it aloud, and then write for 10 minutes (or longer).

“It is the biggest hiding place in the world. The inevitable runaways. The abandoned, only recently reading between the lines. After the beauty contest this is the natural next step. All the big agencies are there. He saved his tips all summer and to see them disappear into a ticket quickened his heart. Not the first in the family to make the attempt. The suitcase is the same one his father used decades before. This time it will be different. The highway twists. She will be witty and stylish there. With any luck he will be at the same address and won’t it be quite a shock when he opens the door but after all he said if you’re in town. Hope and wish. In the light of the bonfire she realized the madness of that place and was packed by morning. They will send back money when they get settled, whatever they can. A percentage. Reliving each good-bye. Practicing the erasure of her accent, she watches her jaw’s reflection in the window. Wily vowels escape. No one will know the nickname that makes him mad. This is the right decision, they tell themselves. And then there is you.”

—Colson Whitehead, from “The Port Authority”

“During the years when I found it necessary to revise the circuitry of my mind I discovered that I was not longer interested in whether the woman on the ledge outside the window on the sixteenth floor jumped or did not jump, or in why. I was interested only in the picture of her in my mind: her hair incandescent in the floodlights, her bare toes curled inward on the stone ledge.”

—Joan Didion, from “The White Album”

“I believe this to be an authentically senseless chain of correspondences, but in the jingle-jangle morning of that summer it made as much sense as anything else did.”

—Joan Didion, from “The White Album”

“There is a crack in everything. That’s how the light gets in.”

This entry was posted in Uncategorized and tagged Antioch College, making a mess, writing process. Bookmark the permalink.